You are not connected. Please login or register

Location : Around
Join date : 2009-12-31
I never thought I would get stressed out with a project, but it looks like it has happened. I have made a poll on my most recent video about this. There are 3 options.

Before I even saw Dan 3.0, I knew I wanted some changes, but I thought it would be cool to make a splash page and call this whole project called Dq 2.0. Many people complained that it was too close to Dan 3.0. So about 2 weeks into my changes idea, I renamed it Dq 2, and created a new logo for it. That logo in my avatar is what it is.

What is Dq 2 you say. Well its about my fans interaction with me and other fans. similar to Dan 3.0. This whole idea with the name and my events part is not really that original. I kinda just took his idea, and changed it to go along with what Im doing. The weekly styles though was my full idea and will still be happening. I hope you all understand now why Im stressed out with this.

The only reason I started these changes were because many people say Im mean or all I care is about fame. I wanted to change that, and create a new project where people would respect me, and that im more loyal to my fans.

Yes I may have taken the wrong way to get to this point, but should I continue? I feel guilty about all of this and I want your opinion. I have set this post so guests can comments, Just fill out the info and caption.

Thanks for reading this,
Your Friend Dq231

Club Penguin Exclusives Forums Is Back.
OMG! That brown penguin moonwalking is humping a purple penguin.

well...
I think you should keep dq productions cause i think your kinda copying This Guy Named Mr Meepers

Im not copying anything, what about the other thousands of people who have studio as part of their name. Plus about 30% of people voted for Dq Studios as seen here: 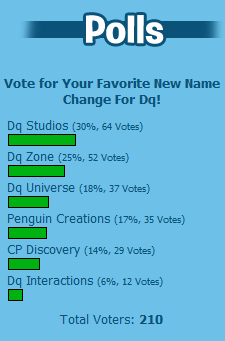 Ya, But I Still Think that you should keep dq Productions and Besides...

Not too many people have studios as part of their name and he had that name before other people..

option 3 is best cause on dq 2.0 you copyed dan and on dq studios you copyed hannah637456 studios

ya, But MeepersStudios was Released Earlier and he copied the name and whoever voted on it...

Just keep the features of Dq 2 (events every week by fans or whatever e.t.c), keep Dq Productions, get rid of the Dq 2 logo but keep the new intro, and keep﻿ posting CP Cheats.

Just because he has a WORD doesn't mean he copied them. He doesn't even know who Meepers or Hannah are! STOP relating to your stupid friends. 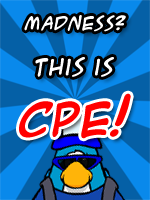 meepers isnt on this forum hannah actually is

I have this all sorted now.
Re: Stressed About Dq 2

Who is online?
In total there are 2 users online :: 0 Registered, 0 Hidden and 2 Guests

» What are the rules

» End of the Summer Party!

» a Thank you Dq party